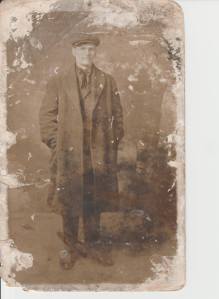 It took one photo for Natalia Korotenko to change her view of her family. She was surprised to find a photo from the early 20th century of an elegantly dressed man who looked like her uncles and cousins.

This wouldn’t be so unusual for many people researching their family tree but Natalia’s relatives had lived in Ukrainian villages.

“Mom remembered that this was her great-grandfather, who had left the Russian Empire for the USA before the October Revolution in 1917,” says the woman from Kyiv. “My mother told me when she was a small girl and her family came to see relatives in the village Malaya Chernyavka in the Berdychiv district of the Kyiv province, the local people called them the “American children and grandchildren”.”

Great-great-grandpa Yakov Perepechai, born in 1877, had lived many years in the United States. He came back to the family Ukrainian village around 1927-1930 to bring money he earned in the USA.

“My great-grandmother said that Yakov often traveled by train to St. Petersburg to exchange money and buy jewelry from immigrants whose ships departed from the port of St. Petersburg to European ports and further to the United States,” Natalia says. “On one of these trips, Yakov disappeared. I tried to find his grave in Ukraine, Russia, the USA and other countries, but without results. I don’t want to believe that something terrible happened to him.”

Yakov Americanized his name to Jacob when he registered for the draft during WWI.

Natalia will continue working to solve this 20th century mystery that started in 2014. The frustration and inspiration that sparked her genealogy journey have brought her lots of success.

She has pushed her family tree back to 1750. When she started this journey, she only knew about her grandparents’ generation. Now she knows her ancestors many generations ago had come from Poland, Germany and Russia, in addition to Ukraine.

Natalia, 46, has researched her ancestors mostly in person at Kyiv, Zhytomyr and Vinnytsa regional archives, in addition to Russia and Poland. She also researches online by e-mailing archives, viewing records on FamilySearch and collaborating on Facebook genealogy groups and genealogy forums.

“This is my inner, or rather, intuitive desire to find out the names, lifestyles, places of residence of my ancestors and thus honor their memory and thank them for the fact that we descendants today live…” Natalia says.

Natalia on a business trip

She is thankful her parents and close relatives support her interest in researching her ancestry by providing details known to them. That is a major change of attitude from when she was growing up in Ukraine.

“Before the collapse of the USSR, nobody spoke about genealogy because they were afraid. And the impression was that such a science did not exist,” says Natalia, an international traveling businesswoman and mother of a 16-year-old daughter. “I went to school from 1980-1990, when they taught false history, and we children believed, because there were no alternative sources of information.”

She speaks unafraid of tragic Soviet times and how that era affected her relatives and ancestors.

“I just now learned in detail how my grandmothers, grandfathers, great-grandmothers and great-grandfathers survived the October Revolution of 1917, fought with Symon Petliura against the Red Army and for the autonomy of Ukraine,”  Natalia says. “They survived the persecution and execution by Grigory Kotovsky, dispossession in 1929-1930, the famine in Ukraine in 1932-1933, the exile and the camps in Siberia, the executions of the NKVD troika in 1938, the return to Kyiv and the difficult post-war life in the barracks of orphanages.”

These experiences of her relatives and ancestors weren’t part of the history she learned in school. Natalia is rewriting the history of her ancestors that was true to their lives, not to the false history she was taught as a child.

This is the third article in the series “Bending Curtain: A Changing Tide in Genealogy in the Former USSR” that will continue throughout 2020. People from the various countries of the former USSR will share their experiences in uncovering their ancestry. Follow this blog with the top right button to catch these unforgettable stories.

Related posts:
Keeping alive some notable ancestors in a Russian family tree
Coming back to Ukrainian roots through genealogy
Introducing “Bending Curtain: A Changing Tide in Genealogy in the Former USSR”

This site uses Akismet to reduce spam. Learn how your comment data is processed.