So much time and money have been spent to find records of my great-grandfather’s service with the Don Cossacks. A family photo shows him in a decorated Don Cossack uniform but records searched in two archives can’t document the same story.

My great-grandfather started his career in mining in eastern Ukraine and moved into explosive inventing for mine exploration, a much different path from the Don Cossack service of his brother, father, uncles and ancestors. It didn’t make sense why his path was so different.

That was until I posted on the most popular Russian language genealogy forum, asking if anyone knew anything about the mother’s family of my great-grandfather. Two quick responses provided nothing useful.

Two months later, a man from the forum e-mailed me if I was still researching my great-grandfather’s mother’s family. He told me at least four files exist at Russian State Historical Archives in Saint Petersburg for people with the same surname from Luhansk, Ukraine, for mining.

The man’s enthusiasm to pursue these records was contagious. Still, I had thought a slim chance existed for the records to be helpful because I knew so little on the family.

Great-great-grandpa Nikolai Pershin was a captain and engineer, which was all I knew about his life that led to a trend of engineers in my family.

Thankfully, I already have a researcher who helps me review records at Russian State Historical Archives. My researcher took a look at the records noted by the guy who e-mailed me.

It was quite the surprise that my researcher discovered in the records. I was so excited after reading her report, I couldn’t sleep that night.

My researcher retyped 16 pages of records. After reviewing the suggested records for potential connection to my ancestors, she opened the Pershin family nobility file. The details in the nobility file confirmed that these were the records of my great-great-grandmother’s family.

The records had a Nikolai Pershin who was a captain and engineer by the time by great-great-grandmother got married. He had a daughter Elizaveta, born in 1838, that was the perfect age to marry a Don Cossack leader in 1861. He had a son, Aleksei, likely the uncle of my great-grandfather whom is noted in another archive record. My great-grandfather also had a son, Aleksei, likely named in honor of his uncle. My grandmother told my father that her father’s mother died young and he was taken care by his mother’s family in Luhansk after her death.

A drawing of the Luhansk  Foundry, where my 4th great-grandfather lived and worked in 1796.

Not only did the records detail the birthplace of my great-great-grandmother’s brother and possibly her own, I learned about her family’s involvement as leaders of the famous Luhansk Foundry back to 1796 and Russian military service unrelated to the Cossacks for several generations.

The foundry was so important that it had a coat of arms. My great-great-grandmother’s brother, Aleksei, presented those coat of arms to Luhansk city duma and it became the city’s coat of arms in 1903. The current Luhansk coat of arms is based on the design Aleksei presented to the city more than 100 years ago.

It took one person’s response to a 2-month-old forum post to break open this amazing family history. The Pershin family tree got pushed back to the 1730s and will open up a second female ancestor’s history to my family. It’s just amazing what can happen after a disappointment.

Related posts:
Years of frustration ends with discovery of one key document
An unreal surprise appears when research on a great-grandfather seems stalled
Untraditional source reveals the death of a great-grandfather
Guide to Using the Best & Largest Russian Language Genealogy Forum (with a video guide)

She is part of the growing trend of documenting graves online. What’s unique about her in this trend is that she lives in central Russia.

Sonia grew up with an appreciation of remembering people who have passed on in her family.

“The life of our ancestors has an influence on us, doesn’t it?,” she says. “They died but gave life to us. We may not forget them. I feel that I’m not alone. They help me to move forward.”

Sonia, who works in information technology, has plenty to be proud in her family. Her grandfather was notable hometown architect Nikolay Bespalov and her great-grandfather was Ivan Kulikov, who worked with renowned artist Ilya Yefimovich Repin.

“So, it was very interesting to know how they became who they were,” Sonia says. “They were both from absolutely different families, workers and merchants. Their ancestors lived all over Russia and abroad. I’ve learned about it after a long research of the family archives and gravestones.” 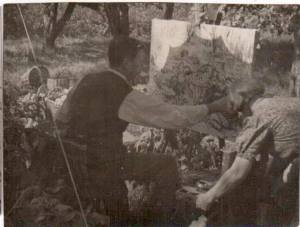 Ivan Kulikov paints in his garden as his wife Elizaveta serves him lunch.

In addition to having those men in her family, her father is second cousin to Vladimir Zworykin, noted as “a pioneer of television technology” on Wikipedia.

“He visited our place in the 1960s and my father remembers it,” Sonia says. “We keep his postcards and letters carefully in our archive…My grandparents were in touch with him and his wife.”

Zworykin came to the USA in 1918 for work and decided to stay in the USA permanently but Sonia’s family stayed in his hometown, Murom. Her parents live in the house built about 150 years ago by Ivan Kulikov’s father. Sonia still lives in Murom.

“He walked the same streets and watched the same river,” she says. “His life is an example of a talented man who couldn’t apply his knowledge to his motherland.”

Sonia, 38, has been interested in her family tree since she was a child. She researches her family tree by studying her family photos, documents and gravestones, talking to relatives and using Instagram and genealogy website Geni.

“There were periods of active doing and long pauses,” she says. “But the tree was on the rise permanently.”

So far, her family tree has about 1,500 people, including her husband’s relatives from Ukraine. Sonia has discovered her ancestors came from Vladimir Region, Moscow Region and Saint Petersburg in Russia.

“My parents always helped me to learn more info about my ancestors,” she says. “My father Alexey Bespalov researches and keeps our family archive. He keeps in touch with other relatives. Sometimes somebody gives me info on Instagram, etc.”

Sonia finds inspiration to research her family tree from her hometown.

“Our city is rather small, but very old,” she says. “We have a museum, a lot of churches, architecture of 19th century. There are always a lot of tourists annually. Merchant families lived here since the old days. Young people want to know their origins.”

This is the second installment of “Bending Curtain: A Changing Tide in Genealogy in the Former USSR,” where people of the former USSR have a chance to be candid about their genealogy journeys. The series will continue throughout 2020. Follow this blog with the top right button to catch all the articles in the series.

Related posts:
Coming back to Ukrainian roots through genealogy
Introducing “Bending Curtain: A Changing Tide in Genealogy in the Former USSR”

Rayisa never imagined she would get into genealogy. With being born in Ukraine, researching ancestors wasn’t encouraged and archives didn’t have an open policy to do research.

She grew up near Ukraine’s capital, Kyiv, only knowing of one grandparent, a grandfather who lived far away. Rayisa’s parents came from Kirovohrad and Khmelnytskyi regions of Ukraine.

“This grandfather lived far away, so I never knew him really well. I missed not knowing any grandparents. I wanted to know what my grandparents looked like, what they loved doing, and other interesting facts about their lives,” Rayisa says.

The mother of four kids and strong faith took a DNA test from 23andme in 2017 and she was hit with the genealogy bug. Thankfully, archives have become more open in Ukraine and Rayisa moved to the USA in the late 1990s. She couldn’t get a 23andme test in Ukraine.

“My parents are not alive anymore,” Rayisa says. “Most of my other relatives who are in their 50s or older were very happy to know that I am interested in my family’s history. Through researching my ancestry, I also met a wonderful aunt who is also interested in genealogy.”

Even though Rayisa has visited Ukraine since she has moved to the USA, she has not personally visited archives in Ukraine. She hired a Ukrainian genealogist to start her research. Then, she e-mailed archives for information and found information on archives’ websites to continue building her family tree.

“In the beginning I knew very little information, even about my grandparents,” Rayisa says.  “Now I can trace some ancestors that where born as far back as the second half of the 18th century…Genealogy is what I love to do the most.”

Now, her family tree has 2,185 deceased and living people. She has researched 18 surnames from Ukraine.

“My mom’s ancestry is the most researched because some records are available online…My dad’s tree has less direct ancestors,” Rayisa says. “Documents where I can trace my dad’s ancestors are preserved well. Unfortunately, those archives where the documents are kept do not make them available online, even though the bulk of them are scanned and available to see on computer by visiting the archives personally.”

She also was able to document an interesting naming situation. Rayisa’s great-grandmother told relatives that she had several sisters named Anna due to the priest assigning the name.

Her research also has uncovered that a direct ancestor’s son was convicted and killed in 1938 for a fake crime. He worked as a helper to a landowner. His fate was found in a confession statement.

This was all learned thanks to a spark started by taking a DNA test.

Thanks for reading the first story from my series “Bending Curtain: A Changing Tide in Genealogy in the Former USSR “.  It will continue here throughout 2020 from the various countries of the former USSR. 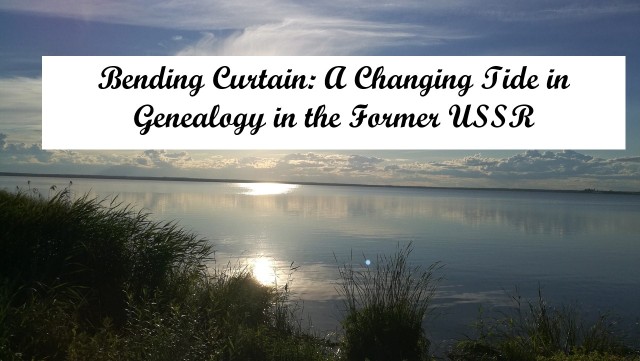 For more than 8 years, I have focused on my journey to research my ancestors from Ukraine and Russia. My journey has made me wonder about what it’s like for people from the former USSR to do the same.

Now, you and I will have those answers. Several people from the former USSR have agreed to answer questions about their journey to research their ancestry.

Each of them have different and amazing stories to tell for my series, “Bending Curtain: A Changing Tide in Genealogy in the Former USSR”. My hope is to give inspiration from seeing the challenges and successes of people from the former USSR.

The series will continue throughout 2020, while I continue to write about my journey in genealogy and the latest databases and resources available in researching in the former USSR.

Remember to follow this blog with the top right button to catch all the stories from “Bending Curtain: A Changing Tide in Genealogy in the Former USSR”. I am hoping you will be as excited to read these stories as I am to tell these great stories.