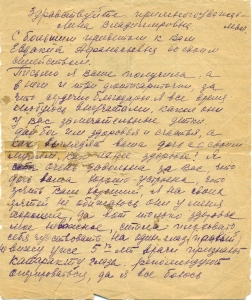 Two letters were overlooked from my grandmother’s house. My mother and I didn’t recognize the handwriting. I was about to throw out the letters because I could tell that there wasn’t “any useful” information for researching the family.

Once I read the names on the two letters, I knew I hit the jackpot. My two great-grandmothers from my mother’s family were writing letters to each other.

Doesn’t sound like a big deal, but it was mid-1950s. One was living in Kiev, Soviet Ukraine, and the other in Berlin, Germany. Talk about a big no-no during Soviet times.

My mother read the two letters and learned her grandmothers were writing as if they were friends. It doesn’t make sense unless you understand restrictions of Soviet times.

My mother’s father was the only one in his family who left the Soviet Union. He was an escaped POW of the Germans. The worst thing a Soviet soldier could do was give in to the enemy. Soon after he returned home from the POW camp, he, his wife and my mom left for the quiet countryside of Germany.

That meant my grandfather and his new family could never see, call nor write to his family in Kiev ever again. My great-grandfather died 4 years after my grandfather left and couldn’t come back for the funeral nor send condolences to his mom.

I later learned that my great-grandmother got pictures of my mother and uncle while they lived in Germany. She cried as she held the photos and wouldn’t say who were the children to the family with whom she lived.

I didn’t understand until now how it was possible that she could get the pictures because contact was “ended” after my grandfather left Ukraine.

It took two crafty grandmothers to come up with a plan to fake a friendship so they could tell each other about their families.

It was quite a risk for my mother’s paternal grandmother. Her husband was born a peasant, got trained as an architect and helped construct grand buildings in Kiev. That resulted in a very comfortable lifestyle in Soviet times, even with having six kids.

My other great-grandmother came from a modest family of German cloth makers, married a tailor and was living very simple in war-torn Berlin. But she was the lucky one who could get on a train to visit the grandchildren, whom the other grandmother would never see nor hear from ever again.

The simple gesture of writing letters gave one grandmother comfort that couldn’t be bought.

Related posts on Soviet life:
When family “wild stories” are nothing but reality
Meet your friendly Soviet repatriation officer